"Hello, have I reached the party to whom I am speaking?" 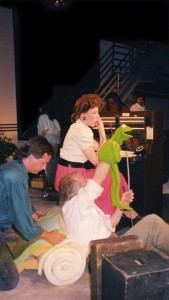 Ernestine was a nosy, condescending telephone operator who generally treated customers with little sympathy. Ernestine often snorted when she let loose a barbed response or heard something salacious; she also wore her hair in a 1940s hairstyle with a hairnet, although the character was contemporary. In the sketches, Ernestine was usually at her switchboard taking calls in the sketches. She occasionally called her boyfriend, Vito, a telephone repair man, or her pal Phoenicia, another operator.

Ernestine seeks to collect on an overdue bill.

Back to Lily's characters